I really need to start calling the police more often.

Would you call the police if you saw a dude get off the bus at the same time as you, pull a 5-iron golf club out of nowhere, flip it around a few times and then return it to a hidden position in one of his pant legs?

Wow, I don't do these things. What's wrong with me? My procrastination is having to evolve I guess...

How many Days/Hours/Minutes/Seconds would it take you to listen to your whole Library/Playlist?
12 days 16 hours 8 minutes 18 seconds

How much memory on your Hard Drive does your music occupy?
21.66 gigs

First song that comes up on Shuffle:
Dayna Kurtz - Love Where Did You Go?

Find "sex", How many songs come up?
26 - mostly from a band calle Circle Jerks?

Find "death", How many songs come up?
17 - Mostly a very good set of songs. Say something about me? 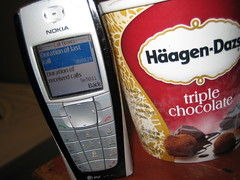 A pleasant evening.
The photographic recipe.

Fascinating factoid of today: my current bottle of shampoo was purchased in May of 2004.

17 months and it's still going. Honestly, I do wash my hair!

Cereal is my comfort food. The obsession is unbelievable. It's my breakfast, it's dessert after a perfectly filling meal, and it's often a midnight snack. I find myself wondering a lot what makes a comfort food such...did they exist prior to mass manufactured food? What was comfort food for Lucy? I'm sure she had the same psychological need at times that I have. One of the most important aspects of comfort food must be that it's like a perfect friend, always there, very pleasant, and ready to tend to you with minimal effort.

I guess this means that cereal is my new best friend. Maybe I should consider again bridging that cultural divide between myself and my roommates, and all of their culturally aligned friends.

So a rumination that I've always had, whenever I'm walking on a familiar route, with at least a semi-determined intent to get to my destination, is what exactly my state of mind will be when I reach certain points along the route? What's it going to feel like when I pass that tree 200 feet ahead? What about the possibility that I never _will_ pass that tree 200 feet ahead?

Truly, it's the most believable method of seeing the future. Since there's very little chance that I _won't_ pass that tree, and since I know pretty much what it will feel like to walk on by, I have this weird sensation of being aware of the future. There's just a very small chance that I'll be wrong.

Why has this captured my fascination for so long? The first time I remember ever being struck by it was in 5th grade, walking past my elementary school's music room. The most recent...well, about an hour ago, walking across my university campus.


On another hand, I've been taking and printing mad photos. Thank god for finally getting my hands dirty!

In the main stacks, trying to write a paper.

A woman just came in and swabbed down a 10 foot section of table with handwipes before she would set her stuff on it. Oddly enough, she is unpacking all that stuff from a bag sitting on the floor. Hypochondriac much?

It's certainly great procrastination fodder though.

Coolest website I've visited in ages. He chills around his house and sings to you!! Awesome...